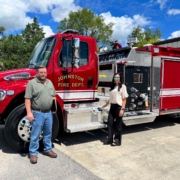 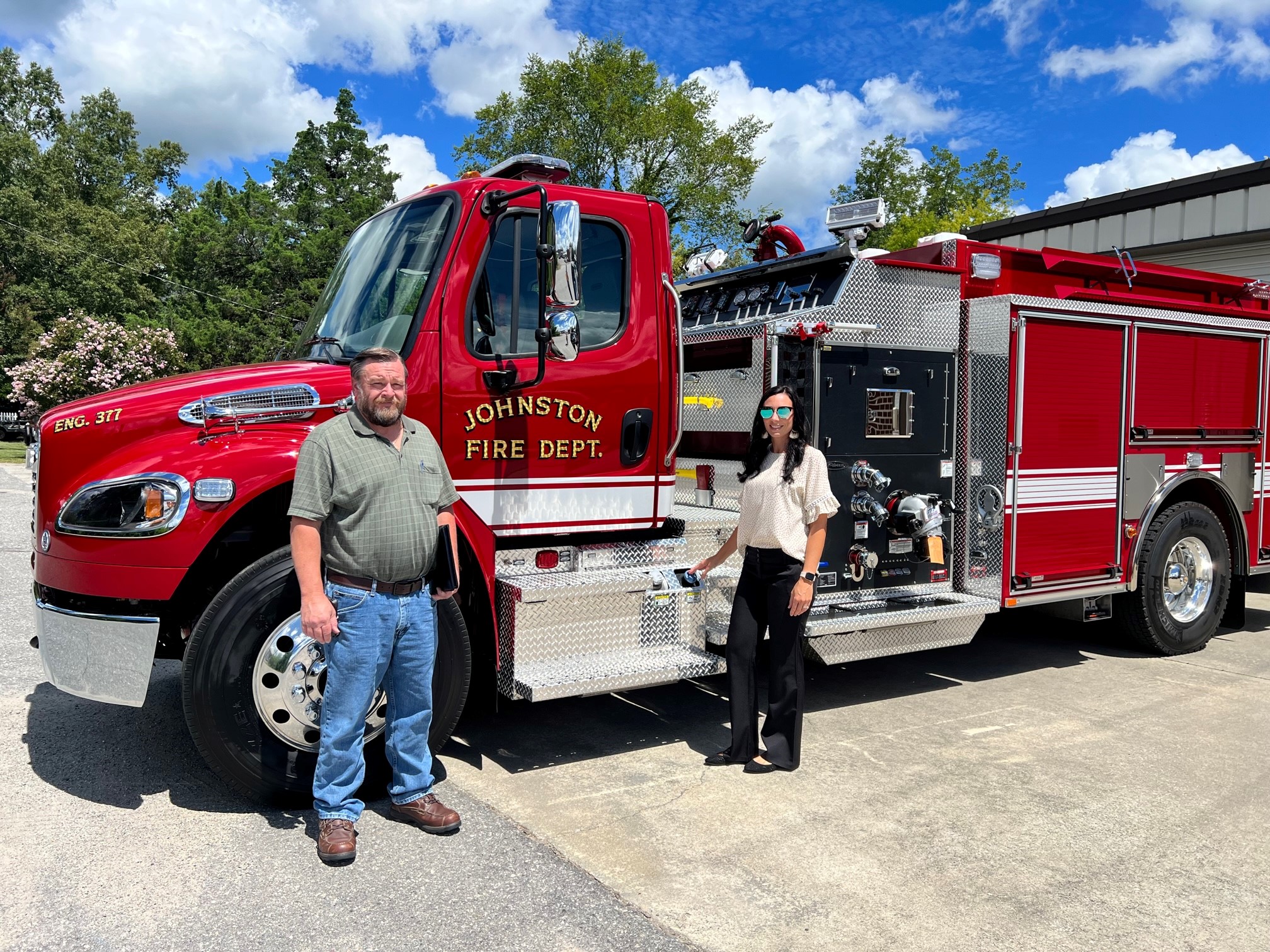 It was a typical hot, muggy August day but it felt more like Christmas in Johnston when a shiny new red fire truck pulled into the Town’s administrative building parking lot.

The truck was funded by a Community Development Block Grant. The Town of Johnston received $454,545 in CDBG funding in November 2019 for purchase of the new fire truck to replace a 1973 model.

The new truck that arrived Aug. 5 will help provide the Town with better fire protection.

The first time Johnston Mayor Thomas Holmes saw the truck, “it was being driven around Johnston looking for a place to get some diesel fuel,” he said, with a laugh. “Then it pulled into our parking lot.”

He added, “It’s a good-looking vehicle, we are certainly proud of it and are looking forward to putting the truck into full service.”

Holmes is impressed by the features of the new truck including air brakes and LED lighting.

“It’s got an automatic transmission and the other one (1973 truck) was a straight drive. We have some younger firemen who have never driven a straight-drive transmission,” Holmes said.

“I am amazed by the workmanship with the diamond-plated areas that we work off of are nice looking. The extendable ladders fit inside a compartment and don’t hang off the outside of the truck.”

“Those younger firemen are real excited about getting the new truck,” Holmes said.

The 1973 truck will be decommissioned though the mayor does not know what the Town will do with it yet.

“The 1973 truck has been around for a long time,” he said. “The (name) plate on the side of the truck has the fire chiefs and council members on it (from 1973). There is only one living member left in the town whose name is on the side of that truck and that’s the former fire chief.”

Holmes said the Town is appreciative of the grant.

“The Town didn’t have to fork out a lot of money for it. Being a smaller town like we are, it would take us years to save that kind of money to afford that. We’d have to borrow the money and extend it over years. The grant money was a wonderful thing for us.

“We appreciate everyone who worked at putting together the grant. We started this before the pandemic. We’ve anticipated this (the truck’s arrival) for a couple years now and it’s finally here and we are excited about it.”

Former Town Councilman Holmes was elected mayor in the spring to replace Terrance Culbreath, who did not run for re-election.

“I invited him (Culbreath) up the other day because he started the (application) process,” Holmes said. “He was pleased to see it. He was a vital cog in putting this together.”

USCOG’s Hallman and Smith were present for the truck’s arrival also.

“It’s very rewarding for Keith and I,” Hallman said. “We know this truck will have many positive impacts from a fire protection standpoint as well as the Town’s ISO (insurance) rating.

“The new truck will give the department the tank and pump capacity needed to comply with their ISO. The 1973 truck is a classic, but it’s no longer feasible to the department from a fire protection standpoint.”

For all who are involved, the truck was worth the wait.

“We have been anxiously anticipating delivery for the past few months,” Hallman said. “The pandemic set us back on completion of the truck and delivery date. It was exciting to finally see it arrive.”